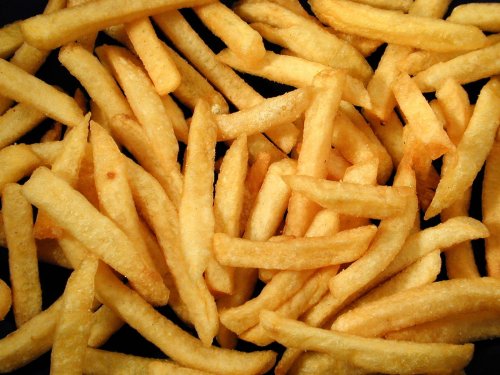 US FDA is concerned with the presence of acrylamide in fried starchy foods which may be hazardous to your health. Acrylamide is a neurotoxin in humans, a known carcinogen in rats and a probable carcinogen in humans. Highest levels found in potato chips, about 1200 ppb, and french fries, about 450 ppb. The World Health Organization (WHO), United Nations Food & Ag Organization and the FDA conclude that this issue is of major concern. Preliminary FDA food analyses for acrylamide suggest that U.S. food levels are consistent with Swedish and European published findings. FDA has developed an action plan on acrylamide to determine risks associated with acrylamide in food and to make appropriate risk management choices.

The Swedish National Food Administration (NFA) has published the results of a survey carried out by the Stockholm University, which showed high levels of acrylamide in food, mainly in fried and baked carbohydrate-rich products like French fries, biscuits and potato crisps. Acrylamide is considered as potentially carcinogenic, animal studies have also shown effects on the reproductive system.
Statement Of CSPI (center for science in the public interest) Executive Director Michael F. Jacobson On WHOâ€™s Findings

The World Health Organization has appropriately found that the discovery of acrylamide in certain foods presents a â€œserious problem.â€ It is critically important that scientists study how acrylamide forms in food, and study ways to inhibit the formation of this chemical altogether.

In the meantime, the FDA should test a range of products and inform the public of its findings. It should also advise consumers to eat less of the most contaminated, least nutritious foods: French fries and potato chips.

Acrylamide is believed to be produced by frying, deep-frying, or oven baking foods at high temperatures. Foods of the most concern are those high in starch like potato chips, fries, bread, crackers, etc. Boiled food preparation has not been shown to produce acrylamide, <10 ppb. Snack foods, consumed very often by children, are of particular concern due to their manufacturing process. Current research suggests that the discovery of high acrylamide levels in food may explain previously inexplicable food related cancers.

In response to above issues, ADPEN Laboratories, Inc., an independent analytical laboratory in Jacksonville, Florida, USA, has adopted the new revised FDA LC/MS/MS method for the determination of acrylamide in food. The method will be validated in additional foods and testing is now available. LC/MS provides more sensitivity than any other means of detection.

ADPEN is a true independent laboratory offering 5 – 7 Day Turnaround for most analyses, at regular prices! We are here to provide you full support for your products and to protect the food supply.